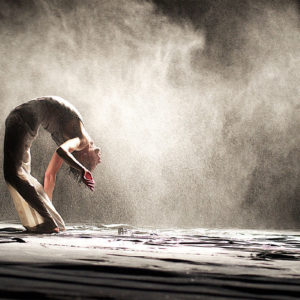 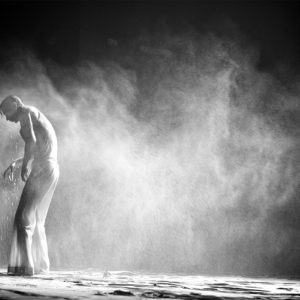 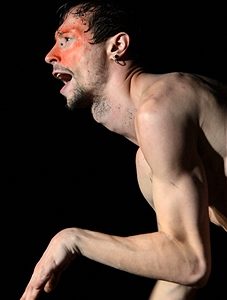 A man has been abandoned by God and all saints. He is standing on a stage covered with mines, refelecting upon himself and the world around him. While struggling with his thoughts, he decides to build a platform from which he can address the crowd.
We try to unfold the thoughts of one man and the way he relates to society. A man thinking about his place, looking for a solid identity that tells him more about his “raison d’être”, a man looking at society, desperately wanting to intervene and to show some kind of collective behavior.”

INSPIRATION
We gathered material that became the basis on which we built our work, such as a photograph by Daniel Blaufuks of a depressed man, smoking, a book on his lap ; books such as The Idea of Landscape by Ana Francisca de Azevedo, Sexual Personae by Camille Paglia and a distorted body. During the creative process of the performance – which was specially created for Romeu Runa – we have been inspired by many more. Catarina Félix, Sandra Rosado and of course by the entire team of The Old King.

We have to fantasize, we have to think. Let’s come together and find out how we all think personally about what we do. In every single person, I recognize one clear and deep thought about himself, his language and his expression. Let’s come together. In these modern times we need more than ever to confront personal and collective thoughts. Let’s reflect on the body, dance, theatre, drama.
I picked the word ‘idea’ from the book of Ana Francisca de Azevedo. I have the ability to imagine things, to express them on stage. I have always been searching for those movements that would lead me to a stage. Performative arts. I wanted to figure out when and why things fall down or disintegrate, when does language fail and make us reconsider meaning and significance?

We used a catalytic text in this performance:
We cling to the idea of daring to leap, to get into a new phase, to face the unknown. The futurist movement initiated this way of thinking. At the beginning of the twentieth century, this was an awkward, revolutionary idea. A way of madness and freedom. Nowadays in society, the idea of movement is fully linked to the idea of progress, of moving on.
“When you are sad or depressed, move on. Yes, that’s the spirit. Move on in order to stay alive, to survive, to avoid getting behind, to avoid having reached your final destination. Be like the sports man who will not quit although he knows he will not rank best. Participation gives him a feeling of ‘mission accomplished’, a feeling that is directly linked to his efforts and sacrifices. In the tug-of-war between him and life, it feels necessary to take part, to be part of a group.”
We disagree totally with this concept. Progress does not make any sense, unless we give in to our feelings of restlessness, unless we jump into the unknown. If you dare to take that leap into the unknown, you take a leap towards life itself, we feel. That leap taken by the performer symbolizes the revolution we all have to fight within ourselves. The streets are empty, you are all alone, this is your decision, embrace the world. And it is the uncertainty of the outcome that makes that jump so courageous. Even if you fail, that is not the end. The alternative for progress is not to stop, it is to jump. It is a confirmation of strength. A way out of being a martyr, of being a victim. It is an appeal to make decisions, to be brave, to celebrate Creation and life itself.

A man is smoking, alone, a book on his knees. This image by the Portuguese photographer Daniel Blaufucks fertilizes Romeu Runa’s and Miguel Moreira’s play, to which it also gives its title, The Old King. The interiority of this depressed person, wandering in his thoughts, is unfurled in a set that evokes the chaos of the beginning or even the end of the world. Reptilian in appearance, the dancer Romeu Runa attempts to extracts himself from this nightmare: he twists, then unfolds to recover his human posture. He surveys, crawling, an enormous and desolate space in which only a few wooden pallets and a plant remain. Assaulted by the elements, he rises and, in adversity, ends up standing upright. Because The Old King traces the path of a man who hangs on to his lost humanity, or in any event, one damaged by solitude. The role of a man shut up in his animality, from which he distances himself by rediscovering his memories and reformulating a vision, a future from them. Under his impetus, the landscape changes colour and consistency, like a magma that its only inhabitant sustains and shapes. In a sensual and defiant body-to-body confrontation with the earth an abstract picture is drawn in which Romeu Runa develops an expressionistic dance, incarnating and projects the torments like the hopes of this mad king who reconquers an empire. To write this poem in choreographic prose, in which the syntax is as important as the rhymes, Miguel Moreira encourages him to push his language as far as possible, to not hold back the dislocations and contortions that characterize his styles. Alain Platel plays the role of the exterior view, critical and welcoming, contributing his sense of rhythm and composition to the two Portuguese artists. Together, they offer us a powerful play in which matter and the king’s body sketch an abstract tableau in perpetual motion. RB 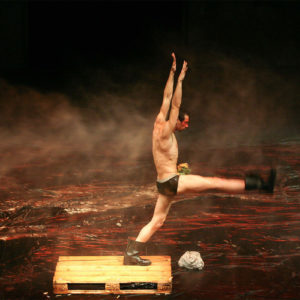 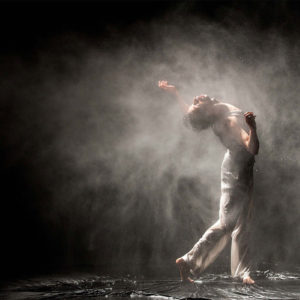 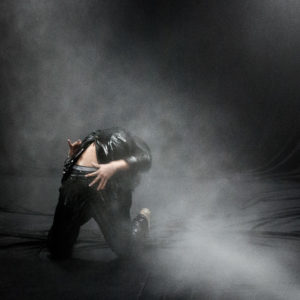 Where our words lay to rest and from time to time, when time presents, a little bit more.

Our branches, stretched beyond tearing, made to build bridges.
To deliver method and process.

Process, form and shape.
We, only as words, never neglecting our existence nor essence, display our hands in past and present shapes.

We use cookies on our website to give you the most relevant experience by remembering your preferences and repeat visits. By clicking “Accept All”, you consent to the use of ALL the cookies. However, you may visit "Cookie Settings" to provide a controlled consent.
By accepting you also acknowledge you are older than 18 years old.
Cookie SettingsAccept All
Manage consent

This website uses cookies to improve your experience while you navigate through the website. Out of these, the cookies that are categorized as necessary are stored on your browser as they are essential for the working of basic functionalities of the website. We also use third-party cookies that help us analyze and understand how you use this website. These cookies will be stored in your browser only with your consent. You also have the option to opt-out of these cookies. But opting out of some of these cookies may affect your browsing experience.
Necessary Always Enabled
Necessary cookies are absolutely essential for the website to function properly. These cookies ensure basic functionalities and security features of the website, anonymously.
Functional
Functional cookies help to perform certain functionalities like sharing the content of the website on social media platforms, collect feedbacks, and other third-party features.
Performance
Performance cookies are used to understand and analyze the key performance indexes of the website which helps in delivering a better user experience for the visitors.
Analytics
Analytical cookies are used to understand how visitors interact with the website. These cookies help provide information on metrics the number of visitors, bounce rate, traffic source, etc.
Advertisement
Advertisement cookies are used to provide visitors with relevant ads and marketing campaigns. These cookies track visitors across websites and collect information to provide customized ads.
Others
Other uncategorized cookies are those that are being analyzed and have not been classified into a category as yet.
SAVE & ACCEPT